PREVIOUSLY: Linda & Wyatt were scouting when Flutters found them, “Hurry! Follow me! Boomer’s in trouble!”

“Reporting to Mac—Ma’am,” Flutters fluttered away.

It took a few seconds for Flutters to reply, “Boomer is in trouble on the North Road. I told Linda and Wyatt, and they’re on their way, but they won’t be enough.”

Episode 8—Scene 4… Colonel Milton Bell’s HQ near the North Road… “We’ve got them,” Bell smiled, “They’re spread-out through the county and we have at least three of them cornered in a cabin about ten miles from here—mount-up, boys—let’s ride!

Bell and his men were much closer to the cabin than any of the Posse-members.

Season 17—Adventure 4—The RETURN—Episode 9—Scene 1… Alphonso believed the best action they could take… “Let’s go out the back door and get our horses.”

“And then ride-out through the woods!” Boomer exclaimed, “Brilliant!” 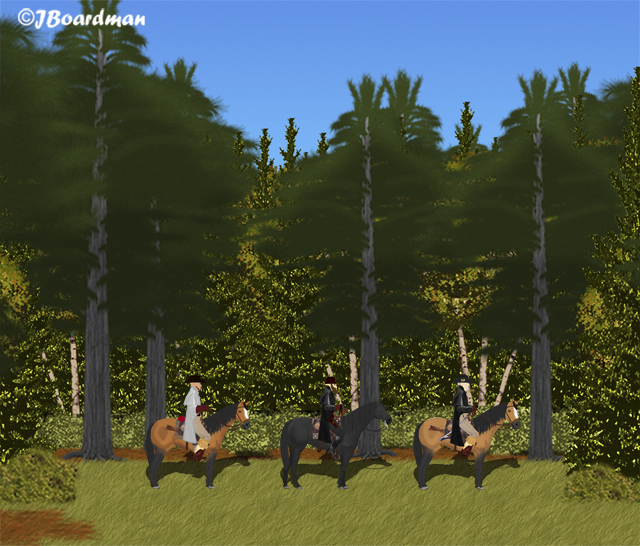 “And then ride-out through the woods!”

And they did just that.

Bell’s men continued to fire on the cabin until one of the smarter of his men noticed that it had been a while since any shots came out of the cabin, “Hey fellas—I think we got them all.”

“Mebbe they’re just waitin’ fer us to get closer.”

“I’m going to find-out, Rufus, you coward,” Jimmy replied, “Anyone else?”

Jimmy went to the cabin and peered through the window—seeing no one inside, he entered the cabin.

Episode 9—Scene 2… Alphonso, AJ, & Boomer emerged from the Woods… on the North Road some distance from the cabin.

And immediately ran into Diamond Jim & his men. 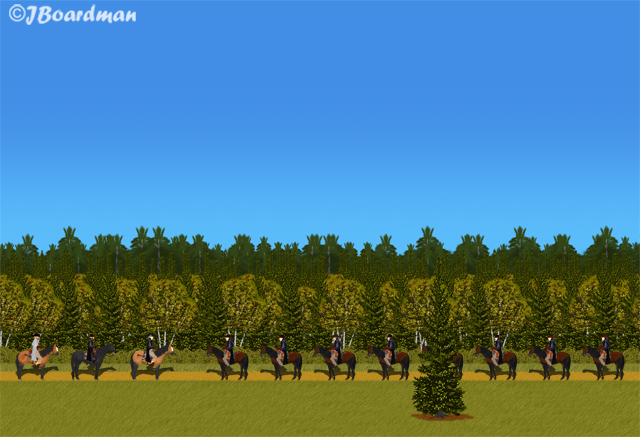 And immediately ran into Diamond Jim & his men.

All three drew their weapons.

“Easy, fellas,” the man leading the column said, “I’m James Wilford and my boys and I’ve heard you folks are having a bit of problem with Milton Bell and his bunch.”

“And you just appeared out of nowhere to help us?” Boomer asked.

“No,” Wilford replied, “A ridiculous talking pigeon told me of your situation—and asked me to help you.”

“Flutters! I should have guessed,” Boomer replied, “Very-well, sir, we have to stop Milton Bell.”

And so, this Adventure ends… But our story? Will Be Continued…