It was a sight to behold

PREVIOUSLY: “How far away?”

“About five miles,” Flutters replied, “They let Bell and four others escape.”

“He didn’t want them to know where he and the others were. Bell had no clue and was just attempting to escape.”

“Yes, Diamond Jim Wilford and his seven men were with Boomer, AJ, and Alphonso.”

“NOW—that makes sense. It will take him some time to get more men.”

In the small town of Flyspeck in Cook County, well-north of the adjacent Moosehead County, Bell began recruiting.

Flyspeck was something of a “Robber’s Roost,” long before Butch Cassidy and his Wild Bunch gang made the term famous in the latter part of the 19th Century.

“How-do fellas, I’m hiring,” Martin Bell greeted those in the saloon, “And I pay top dollar.”

Season 17—Adventure 5—Present & Past—Episode 4—Scene 1… Near Flyspeck… It took about two weeks for more than one-hundred men to gather just off the road to the west of town.

It was a sight to behold. 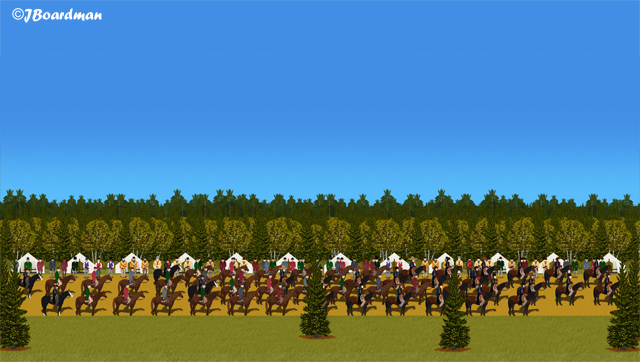 It was a sight to behold.

They didn’t much like one-another—and there were a few fights—some of them gunfights breaking-out here and there.

In the end Bell hired one-hundred men who met his standards. There were a few who thought they were better gun-handlers than Bell.

Young Lieutenant Adams was relieved—he had little experience as a commander. He sent couriers out to find his victims—ummmm—yeah, “victims” is the proper term in this case.

A very-reluctant Captain Boomer was less than pleased—but immediately requested all commanders, war-chiefs and Posse members to meet with him at the fort—hoping against hope—that he could put together enough of an army to defend Moosehead County. 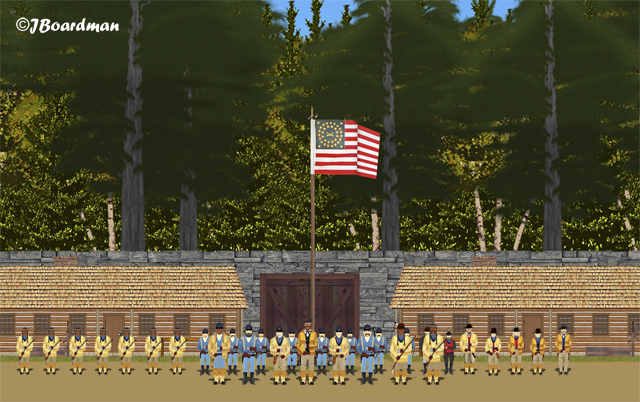 A very-reluctant Captain Boomer was less than pleased

“Yes, Boss,” Mac rumbled, “First—place two 12pdr guns behind the gates—loaded with canister (often bits of chain, nails, and other small metal scraps), and when they come within 50 yards, open the gates and open-fire. Next—brigade a few a mixed-forces of Native warriors, militia, and posse-members to harass Bell’s units—hit & run. Give them no rest, wear them down and hurt their morale.”

“You heard the man,” Boomer ordered, “Chris? You take command of the Posse. You’ll be our scouts and light-cavalry.”

“Colonel Red Cloud? Form a ‘Legion’ along the lines of ‘Hampton’s Legion’ of Civil War fame, include the lumberjacks—they’ll make fine sharpshooters.”

“The lumberjacks are not riders, Captain, and move slowly by comparison—but their skills as marksmen should make-up for that.”

“Thanks, Mathias,” Boomer concluded the meeting, “Let’s get going!”

6 Responses to It was a sight to behold