PREVIOUSLY: Milton Bell engaged William and Andy Carstairs in conversation, “Are you fellows looking for work, by chance?”

“The name is Bell, Milton Bell, at your service.”

Meanwhile at the back of the saloon, Frank Smith was negotiating with the blacksmith for horses, “That much?”

And that GENTLE READER is just what they did—and a deal was made.

Episode 8—Scene 3… Outside the Blacksmith’s place… “Well, sir—what do you think?”

“This is a fine horse,” Smith replied, “If the others are as good, we’ll pay your price—if the boss agrees.”

The boss agreed, and the horses were purchased.

Season 17—Adventure 6—The Search—Episode 9—Scene 1… Outside the Blacksmith’s… The Carstairs-Bell Gang were mounted, having purchased horses enough for Bell and his associates, as the Carstairs brothers and their friends were well & properly mounted on their own steeds. 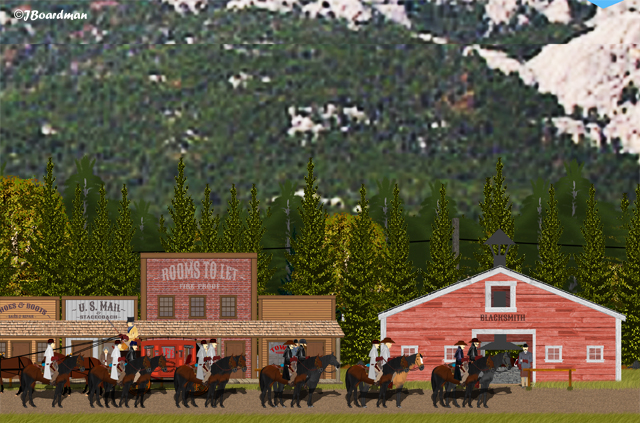 The Carstairs-Bell Gang were mounted…

Just for the sake of intimidation—they rode slowly out of Deadwood. What Bell and his cronies didn’t realize—they intimidated no-one.

Look, GENTLE READER, this IS after all DEADWOOD—folks there are tough.

The Carstairs brothers and friends waved at the townsfolk, who returned the favor. This perplexed Bell—but he too, smiled and waved.

Bell still believed he had escaped Minnesota—that he’d given the “Posse” the slip, “Well, Mr. Carstairs, where do we hit first?”

Bell agreed, “Where, then?”

“Gold mines,” He replied, “And weak banks—and there is a local hideout for us to use.”

“That does appeal,” Bell said, “How about lawmen?”

“There have been a few—all dead.”

Episode 9—Scene 2… Newcastle, Wyoming… The Carstairs-Bell gang arrived in Newcastle, and Carstairs suggested they spend a little time familiarizing themselves with the layout of the town.

The first place they stopped—for “familiarizing,” was the local brothel. 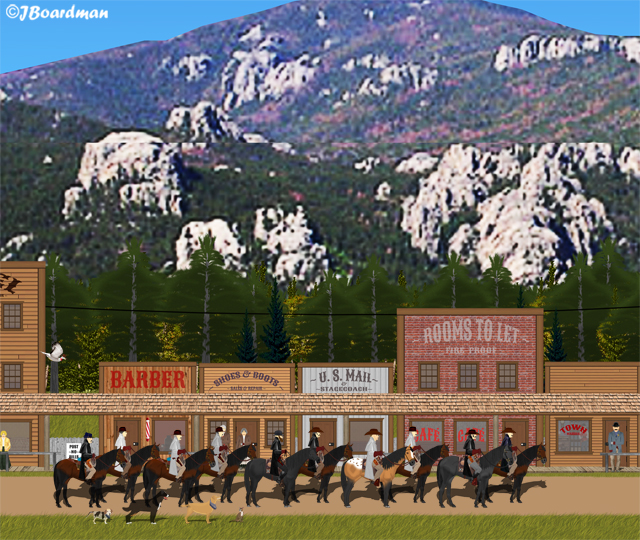 The first place they stopped—for “familiarizing,” was the local brothel.

What they didn’t notice—was Flutters and the ghost critters following them.

But—they were having too-good of a time to notice much of anything.

Except, of course, Carstairs and Bell, who went to the saloon in hopes of recruiting a few men—before they took-over the town.

“Look around, Milt,” Carstairs replied, “Do you see anyone you’d consider hiring?”