PREVIOUSLY: “So—how many words must we speak,” Chris Earp laughed, “To reach that goal?”

“Your question brought us up to 295 words,” Boomer replied.

“Okay, Joey,” Debra quipped, “Tell us one of your looooong stories.”

“Aw, c’mon—I have a million of them,” Joey replied.

Just as they made their way outside, Wyatt Berry Stapp Earp IV pinned his Deputy US Marshal’s badge on—and said, “Colonel Milton Bell, you are under arrest for murder.”

That didn’t sit-well with Bell—and he and his cohorts drew their guns.

Earp and friends were all heroes—and of COURSE—were faster clearing-leather than the bad guys.

Black-power firearms create a lot of dense smoke when fired, and it took several seconds for the smoke to clear.

As the smoke cleared, it became apparent that Colonel Milton Bell’s body was not among the dead! 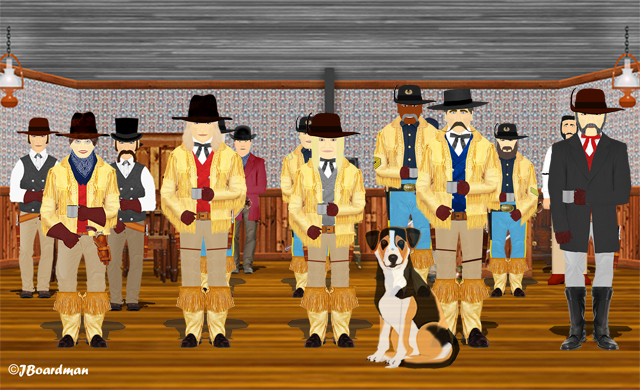 “I was on vacation and playing cribbage with Ringo WolvenKing in the Great Beyond—a girl needs her break from being a deity, you know.”

“Do you know where he is now?” AJ asked.

“Well, Beta Andrew,” Coo-Coo (her nickname) replied, “He’s on the road somewhere. Even a deity can’t discern all on earth, but I CAN tell you that he’s alone.”

“We should send-out the ghost-critters and Flutters to search,” Linda suggested, “but where?”

“Hold-on!” Coo-Coo exclaimed, “I’m getting the sense Bell is alone, still, but has changed his appearance somewhat. He’s not far away.”

“Juco is partially blocking the location,” she replied, “But within 20 miles.”

“We’ll send-out the ghost-critters and Flutters,” Boomer said, “We should prepare to ride.”

Episode 1—Scene 2… Less than 20 miles away from the New Castle Saloon… “What can I do for you, Mr. Bell?” Juco asked.

“Perchance change my identity and appearance?”

“I suppose that along with that you wish a completely new history as well.”

“That would be helpful—as long as my memory remains intact.”

“Will this appearance do?”

Milton Bell found himself standing—next to himself. 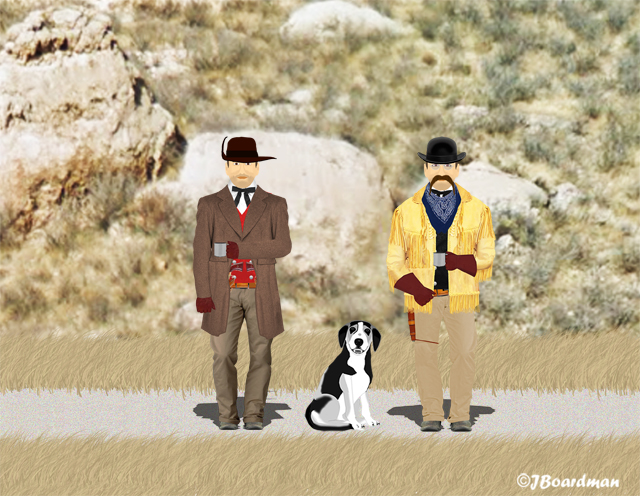 And with that, Milton Bell was no longer himself.