It was quiet in the café—the lunch rush was over when the two strangers walked-in.

“Me too, but with cream, please,” the other man said.

As Kiwi prepared their orders, Hiram engaged them, “You fellows are new in town, what brings you to Danger Bay?”

“We’re in the insurance business,” Stetson replied, “We specialize in business insurance.”

“Everyone we meet believes that,” Stetson replied, “But we generally are able to convince them otherwise.”

Hiram’s internal radar informed him that these fellows might just be setting them up.

Before they could reply, Chris & Wyatt Earp walked-in, “Too late for lunch?”

“You’re right on time,” Kiwi replied, “What’ll you have?” 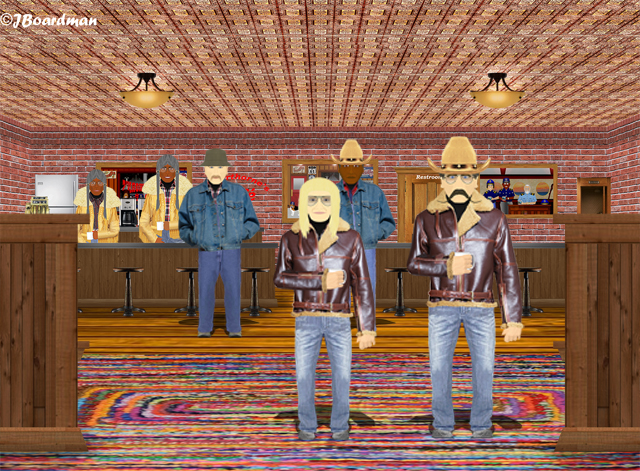 “How about a couple of BLTs?” Chris replied.

Chris looked Stetson and his friend over slowly, “You fellas visiting our little town?”

“Any luck?” Wyatt asked as he looked each man over slowly and obviously.

Both Wyatt and Chris became suspicious.

The two quickly finished their coffees and left Silverthorn’s.

Episode 12—Scene 2… Downtown Danger Bay Minnesota… Stetson and his friend didn’t get far before Sheriff James Silverthorn pulled them over.

“Gentlemen, may I see your license to sell insurance, please?”

“I must have left mine in the motel,” Stetson-wearing man replied.

“Me too,” his unnamed partner chimed-in.

“Okay then!” Jimmy replied as another Sheriff’s squad arrived—blocking any escape, “Step out of the car, please.” 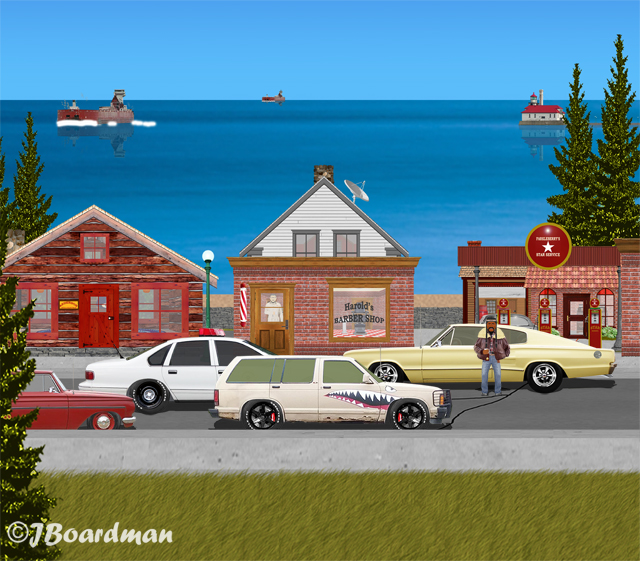 When Deputy Sheriff Smithers searched the two, “It seems Sheriff that these fellows not only don’t have a sales license—they have no ID whatsoever. But, they each have a handgun.”

“You take the one without the Stetson, Deputy Smithers—I get him.”

Both lawmen quickly drew their sidearms—and both bad guys raised their hands. They were just smart enough to know they lost this encounter.

And so, it was—another roadblock to Janet Smith’s plans.

2 Responses to “What’ll you have?”