Previously: “Well, gents,” Lincoln concluded as they left, “Good luck with your prospecting.”

“Don’t be so sure, white-eyes,” Running-Deer replied, “I read the Captain as a most formidable man.”

Episode 7… Scene 2… Outside the Posse Hideout… Ralph Halvorson had no trouble finding the Posse hideout—thanks to Cu-Cu, who gave him directions.

“We were told by Cu-Cu that you were coming,” Linda’s smile was far from leaving her face.

“My first time in the 19th Century,” Ralph replied, “Thanks to Cu-Cu for insisting that Boomer make a 19th Century me.”

“Were there any problems since you arrived on the High Road?”

“I met some cavalry on patrol—but they were no problem.”

“We have word that there have been people asking-around about us,” Linda said, “A Sioux warrior just minutes ago, left after giving me the news.”

“Yes—Cu-Cu has made this place invisible to all but Posse-members.”

Season 17—Adventure 11—MANHUNT—Episode 8… Scene 1… Inside the Posse Hideout… “This looks comfortable,” Ralph said as he entered the cabin.

“Yes,” Joey replied, “For those of us who are not relegated to a tipi outside.” 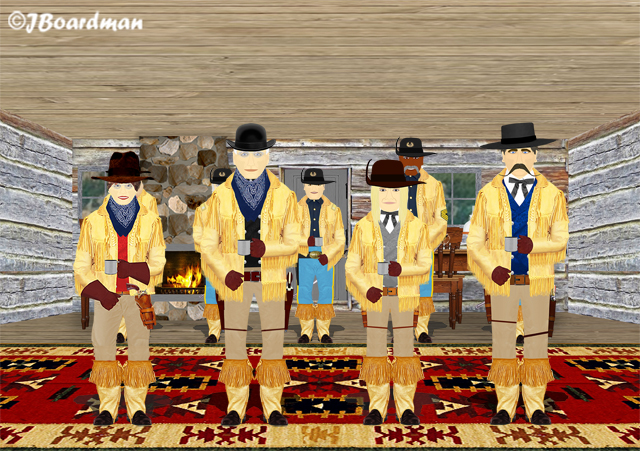 “For those of us who are not relegated to a tipi outside.”

“Or those who must share a tipi with Joey,” Boomer laughed.

“May I assume we have some difficult situations ahead of us?” Ralph asked.

“We do,” Chris Earp replied, “We’re outnumbered and out gunned—and we’re expected to bring those miscreants to justice.”

Episode 8… Scene 2… Inside the Posse Hideout… “I’m Captain Thad Lincoln of the Tenth Cavalry Regiment Militia, and I understand there’s some reserve troopers here,” he was looking directly at Mac, Joey, Boomer, and AJ as he spoke, “You’re all now part of my Militia.” 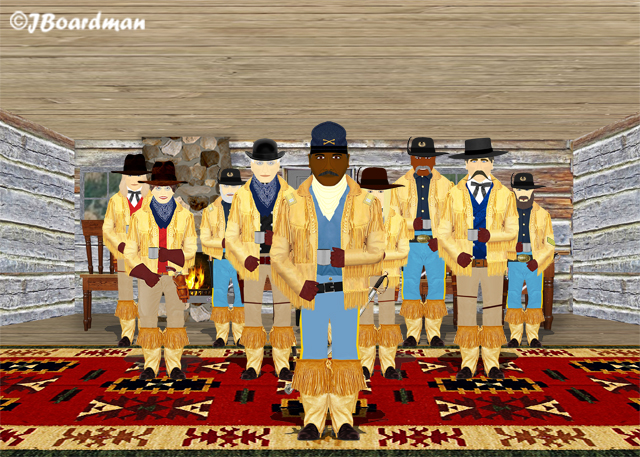 “You’re all now part of my Militia.”

“Okay, you can do that,” Militia Captain Boomer replied, “Your date of rank?”

“June 1, 1873,” Boomer replied, “You can wire Fort Leavenworth to confirm that—but, it appears you are second in command of my militia.”

“As soon as I can find a telegraph office, I will check.”

“Does this mean we don’t have to sleep in tipis?” Joey asked.