Previously: “Gee,” Mac grinned, “I wonder what my old friend General Whitcomb thinks about that?”

“He was Colonel McKinley when we served together during the war.”

“No,” Mac replied, “His battalion Sergeant-Major.”

“You have a telegraph here—contact him now!”

Mac and his fellow militia-members all grinned—widely as McKinley’s aid had his aid send the message and repeated McKinley’s reply, “Damn-right McIntyre was my Battalion Sergeant-Major, and a damn-fine one at that. Do you have a problem with that?”

“You’d best send a reply now—if you wish to continue your career.”

The Town Marshal, William McCoy, and his Chief Deputy, Jon Hopkins were in the office, “How may I help you?” Marshal McCoy asked.

“By telling us you’ve made some arrests in the shooting at Nuttal & Mann’s Saloon,” Wyatt Earp asked.

McCoy smiled, “No arrests were made—because we didn’t think it was necessary, as only scum had the misfortune to be shot during the ruckus.” 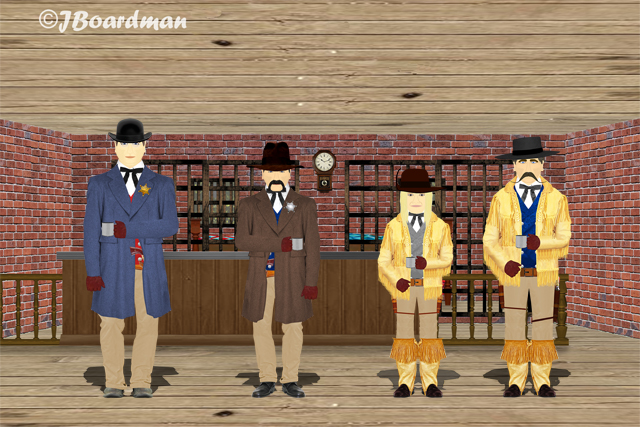 “GET OUT—NOW!” William McCoy demanded, “Before we start shooting!”

McCoy’s eyes widened—he knew if he said the wrong thing—he’d be joining his ancestors, “P-p-please enjoy your stay here in Deadwood.”

“Well,” Wyatt replied, “Mrs. Wyatt Berry Stapp Earp—do you think should be next?”

“How about returning to the saloon and causing trouble for the owners—THAT would be fun.”

Episode 2…Scene 2… Black Hills Near Deadwood… Captain Boomer and Company patrolled for many, many miles along the RR line—and found no bad guys. 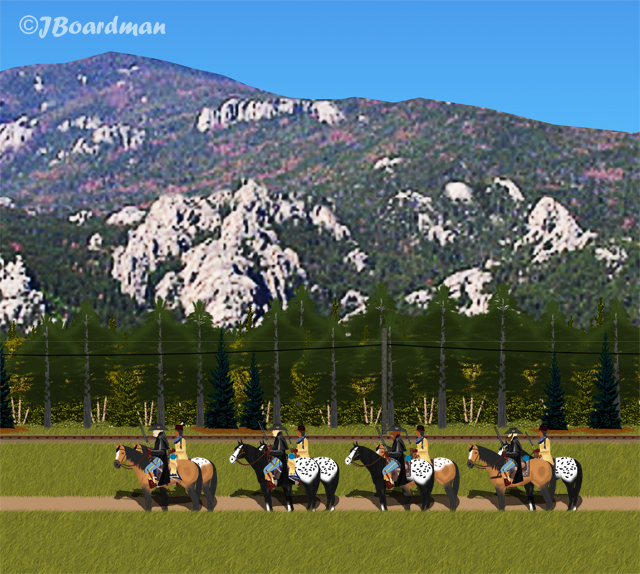 “You think, Joey,” Mac replied, “What you call fun—would be getting ambushed?”

“No,” Joey replied, “But I brought my 21st Century camera—lots of great scenery hereabouts.”

Episode 2…Scene 3… Still in the Black Hills Near Deadwood… Captain Boomer and Company patrolled through a Ghost Town—and imagined it in its hey-day. 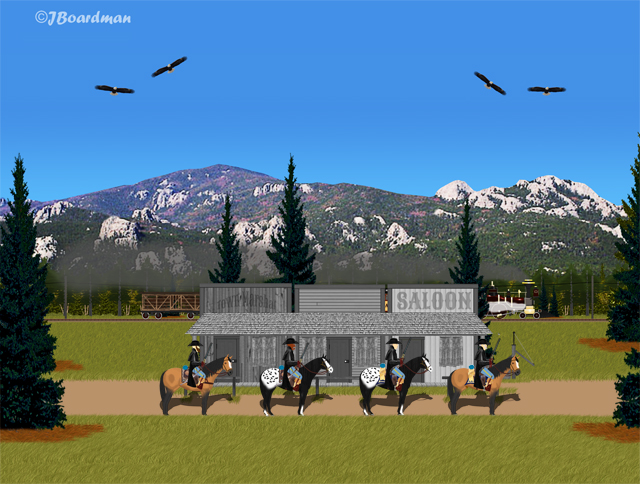 Captain Boomer and Company patrolled through a Ghost Town

“Whatever made you think that, Joey?” AJ asked, “The fact that there-is only three buildings?”