“You fellas ain’t a-gonna survive this.”

Previously: Wyatt and Chris Earp returned to Nuttal & Mann’s Saloon, along with Debra, Linda, and Ralph.

“Where are Janet Smith, and Willie Jones?” Chris Earp asked.

Season 17—Adventure 12—Fort Dakota—Episode 4… Scene 1… Deadwood City Marshal’s Office… Leaving Ralph & Linda outside with the prisoners—Debra, Wyatt & Chris charged into the office and found it empty—save for Old Willie in the jail cell.

“Where are the marshals?” Chris asked Old Willie. 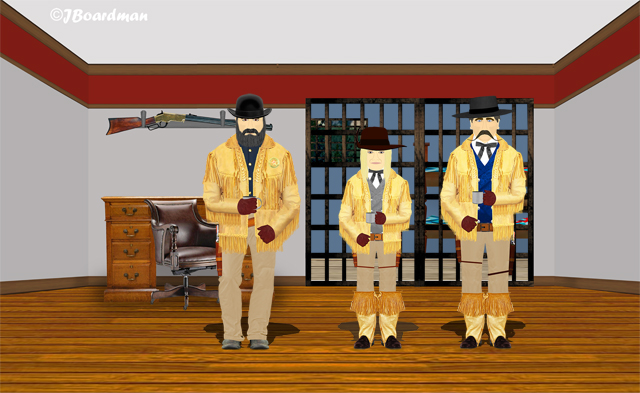 “Where are the marshals?”

“I h-h-h-have no idea,” Willie stuttered, “I’ve been here too long to p-p-pay attention to their coming and going.”

“Why are you here?” Debra asked.

“Why are you in jail?” Chris asked.

“What was your last job?”

“Really?” Chris replied, “Why did you lose your job?”

[Yes, GENTLE READER™, “Big A” returns to our stories as a Bad Guy!]

Episode 4… Scene 2… Black Hills near Deadwood… With Hal Barber and friends cuffed to their saddles—our heroes began their trip back to Deadwood, “You fellas ain’t a-gonna survive this.” 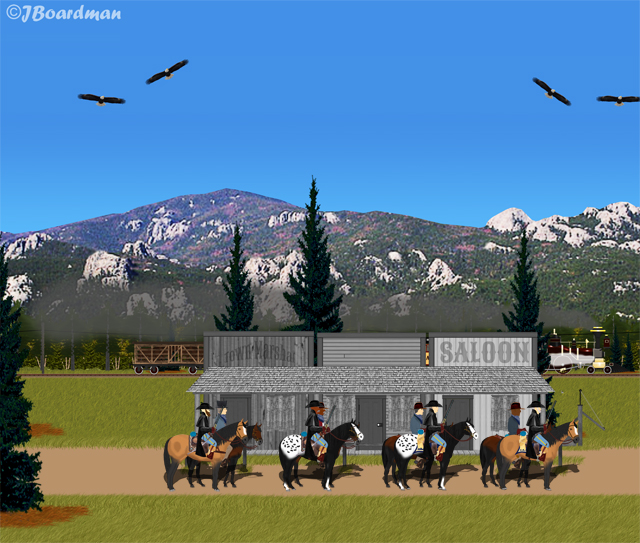 “You fellas ain’t a-gonna survive this.”

“Fat chance,” Wilson replied, “Alan Simpson IS the mayor—and I work for him!”

“Who, exactly, is this guy?” Joey asked.

“Alan Stanley Simpson was my very-first bad-guy back in aught-seven when I started this blog,” Boomer replied, “Right Mac?”

Episode 4… Scene 3… Downtown Deadwood… The marshals with their prisoners rode slowly, deliberately, into Deadwood towards the City Marshal’s office at the far end of town.

They scanned the street for any lurking desperado looking to make a name for himself.

In fact—nobody seemed to notice them at all.

That was troubling, “Well, this is strange.” 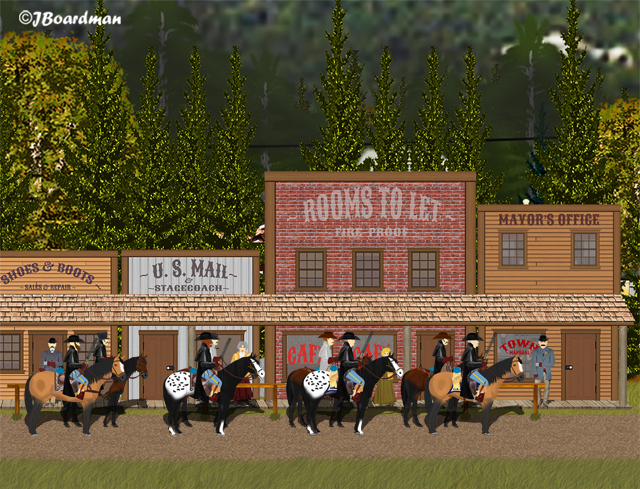 “Well, this is strange.”

“We may never know,” Joey concluded.

“I try not to think, Boomer—thinking hurts,” Joey laughed.

“I know that truth.”

Meanwhile—Chris and Wyatt Earp made their way to the mayor’s office on the second floor of the City Marshal’s office.

2 Responses to “You fellas ain’t a-gonna survive this.”