Author’s Note: With this episode I am again including images.

This was a good thing for Captain Boomer, Lieutenant Joey, Sergeant-Major McIntyre & Sergeant AJ—all of whom knew of the ambush thanks to Cu-Cu.

They kept conversation going with Simpson’s men to keep them distracted as they made their way through the reservation.

“So, fellas,” Joey grinned, “Do you have experience with the local injuns?”

“Not here,” Jim Attucks replied, “But in Dakota we’ve had plenty.”

“On the plains?” AJ enquired.

“It’s a lot different here in the forest,” Big Mac replied, “They can be just a few yards away and you won’t see them.”

“HA!” Boomer exclaimed, “Their Kentucky Rifles have twice the range of your rifles.”

They rode deeper into the forest without conversation. AJ looked at Mac and gave him a quick grin.

A grin that communicated that his keen vision had seen the ambush.

Just as Silverthorn and his band opened fire, our heroes drew their revolvers and ended all resistance by the remaining outlaws. 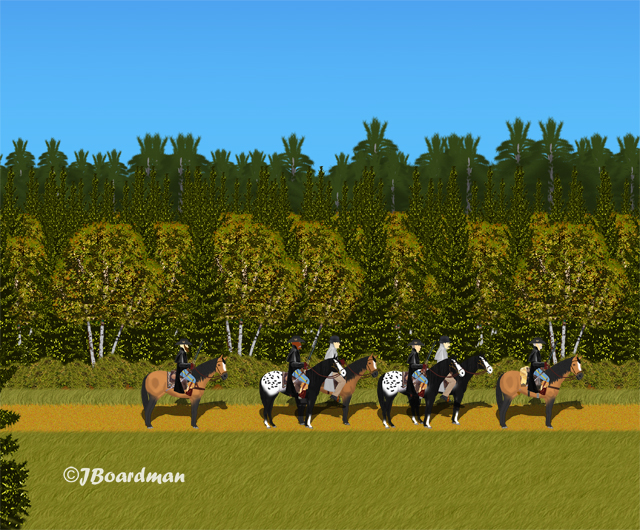 “A wise move,” AJ smiled as he and Mac shackled their hands to together, “Enjoy your ride.”

Lt. Jerkovich looked toward the forest, “Thank you Chaska-Kohana.”

“You are welcome—it was our pleasure,” he replied, “We’ll bury the dead if you wish.”

“And deprive the scavengers their next meal?” Boomer replied, “Yes, please.”

After several hours of riding—mostly in silence they met-up with Chris, Wyatt and company on the road outside the village of Danger Bay.

Episode 11… Scene 2… On the coast road outside Danger Bay… “Imagine running into you folks here,” Big Mac rumbled, “So good to see you, again, Biggass.” 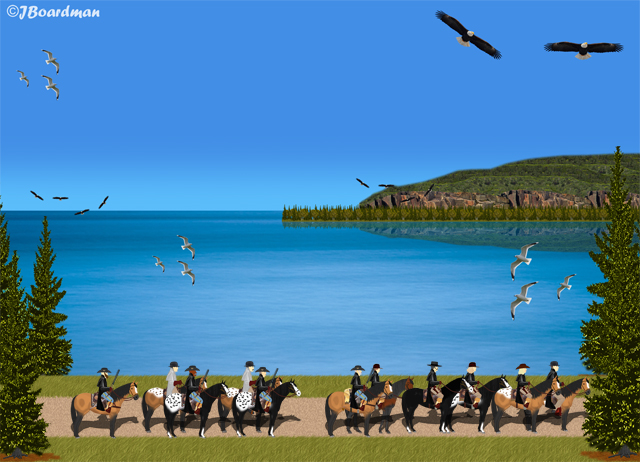 “So good to see you, again, Biggass.”

“Next stop,” Chris Earp grinned wickedly, “Moosehead City, where you’ll be placed aboard a train for Fort Leavenworth.”

“Where you’ll be charged with, among other charges, murder,” Wyatt Barry Stapp Earp added, “You may never see the light of day—except through steel bars.”

“I’m hoping you try to escape,” Mac smiled, “Before we get to town.”

“Aw c’mon Mac,” Debra rejoined, “That would be too humane.”

“True enough,” Mac replied, “The other prisoners at Leavenworth would be deprived of some fun as Simpson’s expense.”