The Posse™ arrived in Deadwood

PREVIOUSLY: “New,” Simpson replied, “Classic cars are great—but servicing can be a hassle.”

“Well,” He replied, “We were just closing—but I’ll be happy to help you.”

Schmidt went outside with Simpson and inspected his cars, “I’m impressed—these cars are in good shape, overall—how many cars are you interested in purchasing?”

“We have that many available,” Schmidt replied, “One was to be purchased by a company as the manager’s car, and three for a police department, for which our bid was rejected. Needless to say—I’ll give you the cars at my cost—less your trade-ins.”

“Write it up,” Simpson smiled.

Less than an hour later they were checking-in to the Deadwood Hotel.

Episode 8—Scene 3… At a gas station on the road to Deadwood… Boomer stopped to get gas—and whatever delicious treats they might have.

WHY—he needed gas is beyond me, GENTLE READER™, he could have stopped when the rest of the Posse™ stopped (or—maybe because the rest wouldn’t fit in the gas station I made, or maybe it’s because the attendant resembled Lar Farkleberry—I don’t know).

He resembles Farkleberry mostly because I used his image as the attendant.

Boomer & Company were back on the road a few minutes later. 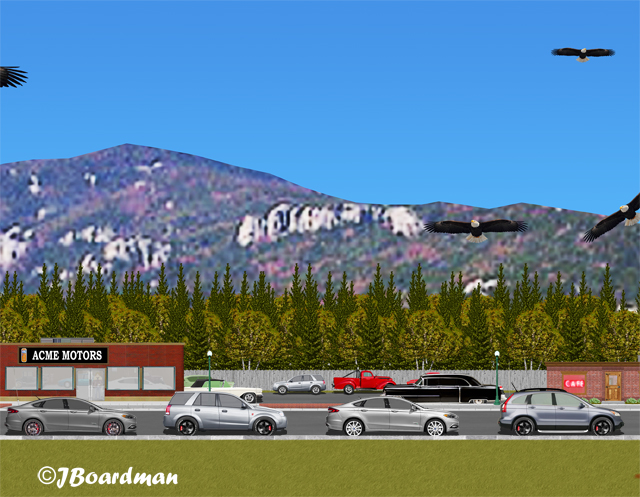 “Will you look at THAT!”

They pulled-over to the curb and went inside.

“Could you tell us about that black Cadillac?” Mac asked.

“Sure,” the salesman replied, “We took it in trade, along with four other cars; they purchased six new Chevrolets, all the trade-ins were in good shape.”

“Thank you,” Mac replied, “It sounds like a good deal all around.”

As they drove-off—they held a meeting via their respective communicators, “Are you thinking what I’m thinking?”

“And do what?” Clive Jackson asked. 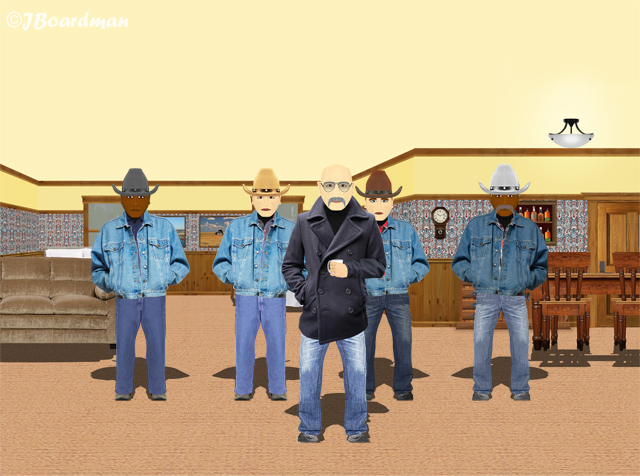 “Go out and enjoy Deadwood—as if you’re tourists.”

“And stay out of trouble,” Fred Prokup added, “Regardless of any provocations we may experience.”

3 Responses to The Posse™ arrived in Deadwood