It is apparent we must build another new Posse Headquarters™…”

Previously: Inside the Lakeside Bar… Brian Wright spotted Hopkins and walked-over to him, “Hello Frank.”

“I have an operation for you,” He replied quietly, “One that you and your militia are exactly the right bunch to pull it off.”

“You’ve got my interest—tell me more.”

“Located on the Superior Bluff, it is alarmed and possibly booby-trapped.”

“Give me directions so I can give it a look.”

Episode 8—Scene 2… Outside the Posse HQ… “This doesn’t look at all like what Brian described,” Hopkins thought as he looked through the open gate.

He called Brian Wright, “Brian—all I see is an old fishing-boat with an old man standing outside a cabin.”

“Are you sure you’re at the right place?”

“Yes, I am,” he replied, “Do you really think I’m that directionally challenged?”

Season 18—Adventure 3—SEARCHING—Episode 9—Scene 1… Outside the Posse Headquarters™… Captain Frank Hopkins not only wasn’t “directionally-challenged,” but also a very-determined man—and THAT made him a very-dangerous man.

He followed a trail that branched-off from the main road outside the Posse HQ—and hit pay-dirt! The trail led to a point where there was a break in the trees.

The break exposed the Posse HQ! 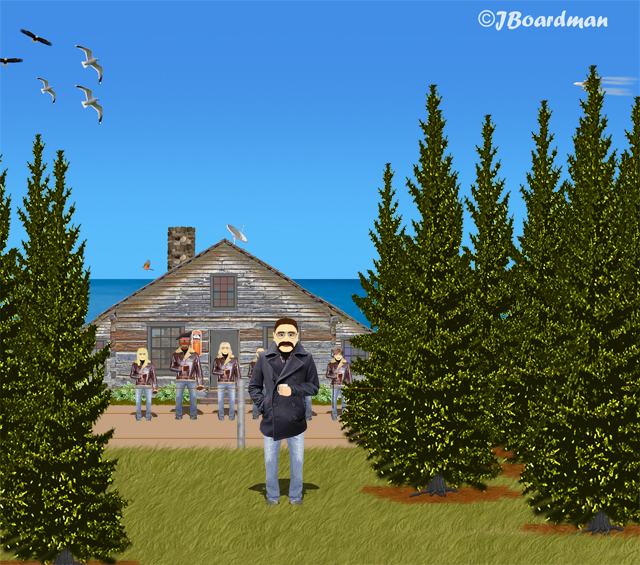 The break exposed the Posse HQ!

He immediately contacted his sergeant—who marshaled the militia and headed towards the HQ.

Of COURSE, the Posse was relatively well-prepared (aren’t they always?) and they immediately called Wyatt and Ralph, who were at the airfield preparing to get some time in the air—and already had two airplanes ready to fly.

The two had planned to get some range-time in and both aircraft were loaded with live .50 caliber ammunition. 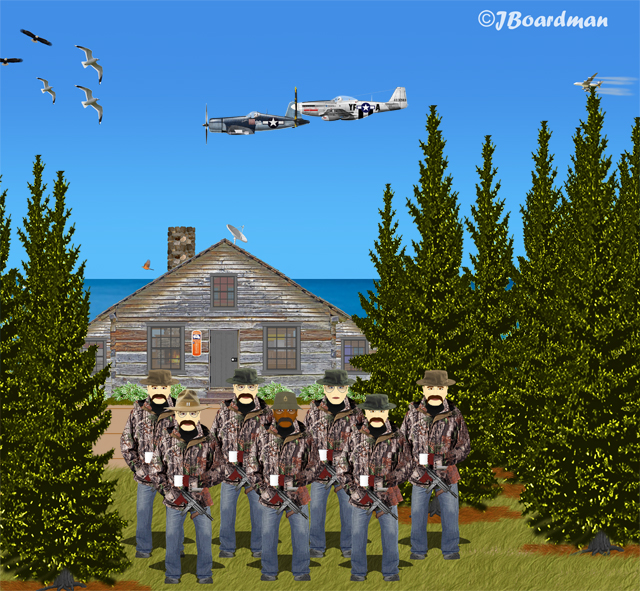 Moments later they arrived and quickly decimated the attackers…

But—not before the (off-stage) heavy mortars’ 105mm shells penetrated the roof of the Posse Headquarters™ and destroyed the main level of the building.

The Posse only survived because of Boomer, and in particular—Sergeant-Major McIntyre’s military training—they took cover in the well-protected operations-center in the basement.

The damage to the HQ was beyond repair.

“It is apparent we must build another new Posse Headquarters™,” Mac dead-panned.

While this Adventure has ended… Our story will be Continued…