“I hear a helicopter!”

“Easy, using your real first-name gave you away,” Mac rumbled with a wide grin, “And you need our help—there’s been a hit put-out on you”

“Captain Frank Hopkins—commander of a militia company—way more dangerous to you than we are.”

Allen Stanley Simpson (AKA Stanley Davenport) did just that—and they were soon on the road.

NOW—as to the threat posed by Hopkins… 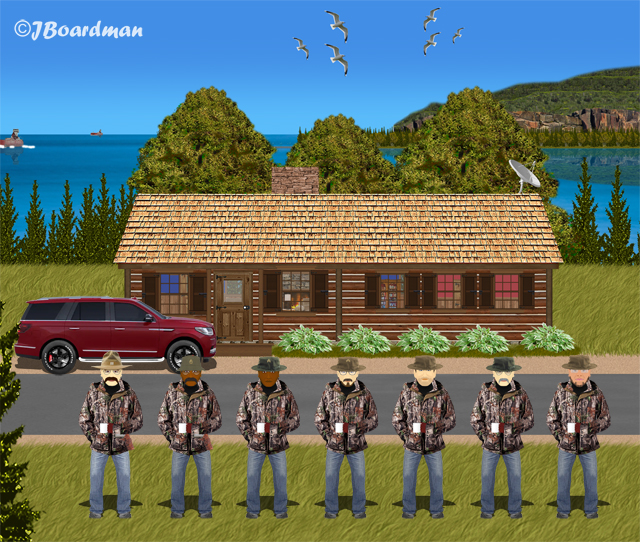 Moments later—they stopped shooting and entered the cabin, “How did he get away—his cars were here?”

“The Posse, Sergeant,” Hopkins replied, “It HAD to be them.”

“You and Wilson, Sergeant Meadows,” Hopkins said, “Will take our Huey gunship and assault the Posse headquarters.”

Episode 9—Scene 2… Attack on the Posse HQ™… The militia was on their way—by helicopter—and by ¾ ton trucks.

The Posse™ were prepared for the attack…

Weapons were cleaned and loaded.

Ralph and Wyatt were at the airfield preparing their respective P38 and P51 airplanes for combat—they’d be in the air in around ten minutes.

The Posse’s plan was to remain in the HQ where the building’s titanium armor would protect them for the most part—while the Historic Air Force airplanes dealt with the attackers.

“We are as ready as we can be,” Big Mac was satisfied with the preparations, “Now—we wait.”

“I like the fact that Moosehead County decided to make road repairs on the only road leading here from the highway,” Chris Earp observed, “At our request.”

“Yeah,” Joey added, “The County Commissioner was grateful for my recipe for gratis soup.”

“I wonder what preparations the county sheriff has made,” Debra, “They were going to help us—right?”

“She said she didn’t have any available deputies,” Mac replied, “How DID she get elected?”

“I hear a helicopter!” Linda exclaimed. 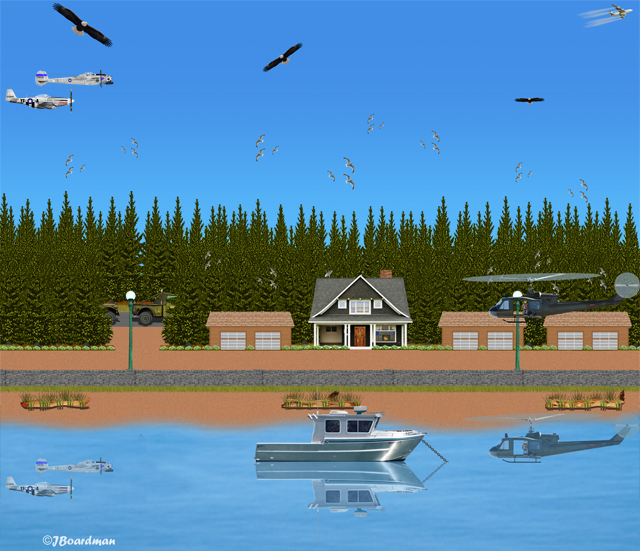 “I hear a helicopter!”

The attack by the militia was short-lived—the Huey was badly damaged by Wyatt and Ralph, causing it to fly away and crash-land on the lake. Both occupants survived.

The ground attackers didn’t fare any better—all but Captain Hopkins died under the fire of Wyatt and Ralph.

7 Responses to “I hear a helicopter!”