PREVIOUSLY: “We are as ready as we can be,” Big Mac was satisfied with the preparations, “Now—we wait.”

“I like the fact that Moosehead County decided to make road repairs on the only road leading here from the highway,” Chris Earp observed, “At our request.”

“Yeah,” Joey added, “The County Commissioner was grateful for my recipe for gratis soup.”

“I wonder what preparations the county sheriff has made,” Debra, “They were going to help us—right?”

“She said she didn’t have any available deputies,” Mac replied, “How DID she get elected?”

“I hear a helicopter!” Linda exclaimed.

The attack by the militia was short-lived—the Huey was badly damaged by Wyatt and Ralph, causing it to fly away and crash-land on the lake. Both occupants survived.

The ground attackers didn’t fare any better—all but Captain Hopkins died under the fire of Wyatt and Ralph.

Season 18—Adventure 5—HOPKINS—Episode 1—Scene 1… Outside Hopkins’ Base-Camp… “The first thing on our agenda is to find another place for our HQ.”

“Because this so-called Posse will find this camp.”

“I know of a vacancy,” Jones grinned—wickedly, “Davenport’s cabin.”

“Good idea,” Hopkins replied, “I’ll see if I can find who owns the cabin.”

“Perhaps I can help you,” A disembodied voice interrupted. 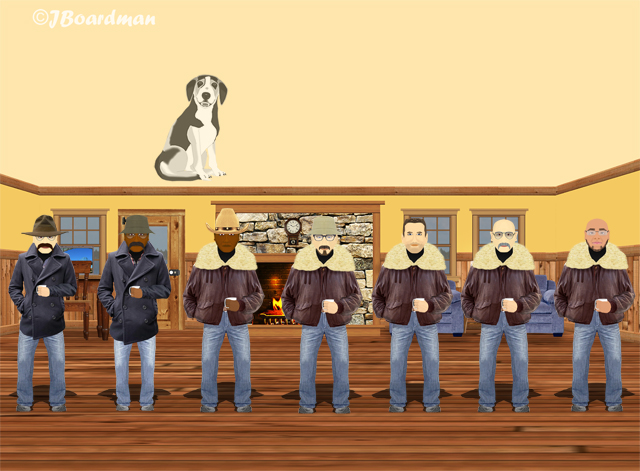 “I am Juco,” the voice replied as a specter-like image of a dog appeared, “I know who owns this place—and she would love to unload it.”

“For now—just a friend who detests the Posse,” he replied, “Here are directions to the cabin.”

Episode 1—Scene 2… Outside the Cabin… “WOW!” Staff-Sergeant Jones exclaimed, “Look at that view!” 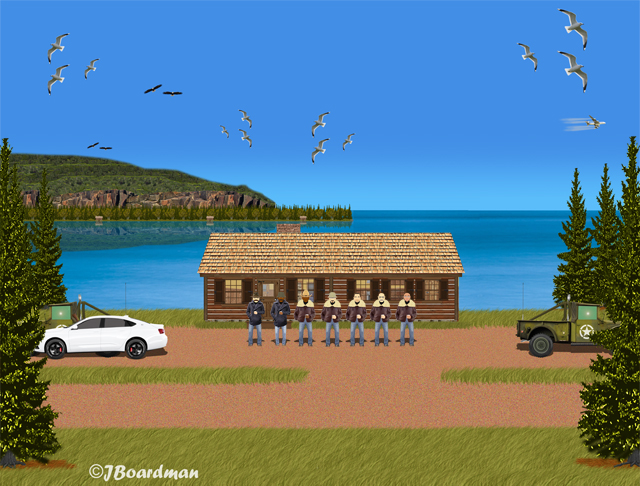 “Look at that view!”

“The Posse certainly can’t sneak-up on us from the lake,” Hopkins observed, “And we can place sensors & cameras on the road leading here in both directions.”

It was as he spoke that Juco arrived, “Let’s look at the interior, gentlemen.”

Episode 1—Scene 3… Inside Hopkins’ Cabin with Juco… After touring the entire cabin Hopkins and company gathered in the great-room.

“Quite satisfied, Juco,” Hopkins replied, “Now—about the Posse, and their ally, Cujo*.”

“I’ll deal with them—I have an advantage they won’t expect!”

2 Responses to “Who is there?”