“It sure is,” Daisy bayed (beagles like to bay), “Should we haunt them?”

“That would be fun—we can materialize after they set-up their sensors and bite the wires apart.”

“I hope they’re low-voltage—as does my mouth,” Daisy bayed a laugh.

As Hopkin’s gang installed the sensors—the two ghost-dogs waited until the gang-members were, at least, a mile away before they chewed-through the wires.

When Hopkins attempted to activate the system—it failed.

He then would send his crew out to repair the system—Hopkins would again test it.

The system continued to fail, and Hopkins blamed squirrels—and decided to quit wasting-time with it.

The ghost-dogs’ work was done—and they decided to see if Cujo anywhere around—she was, and the three of them had a grand time joking at Hopkins’ expense.

Episode 2—Scene 3… Ghost Dogs Daisy & Mattie arrived inside the Posse HQ™… The two were beyond excited to report their success.

“And they tried to get their system working for hours, Joey,” Mattie barked a laugh, “And we waited a short time and chewed the wires again and again.”

“And never got caught!” Daisy laughed. 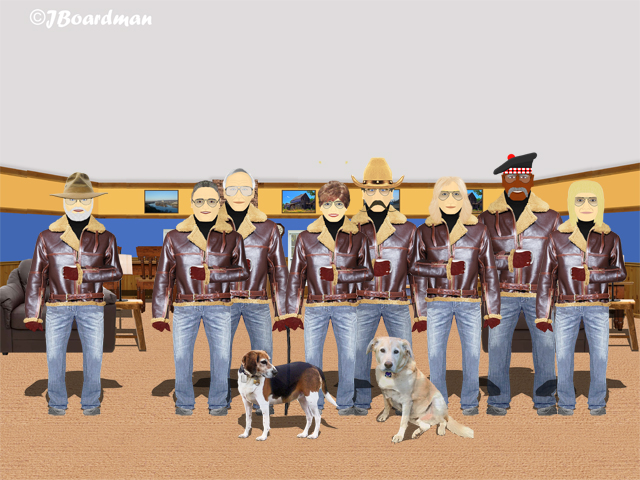 “We’ll send the dogs back out—to spy on Hopkins.”

“Well,” Chris rejoined, “I’d rather we settle the issue permanently.”

“They are dangerous to us,” Linda added.

“We could go into town,” Mac rumbled, “And see if that draws them out.”

“Or,” Chris suggested, “We could arm our cruiser…”

“We can do both,” Mac rumbled, “But not forget about Big A.”

“True,” Boomer replied, “We can’t let him off free and clear.”

“Very-well, you may join Boomer—but just the two of you—Hopkins is our main target.”

“As for the rest of us?” Debra asked.

“You and Joey go into town and hang-out—visit some of the restaurants and bars.”

“What about Ralph and I?”

“You two arm the cruiser and go play out on Danger Bay,” Mac rumbled, “Wyatt, and I will hang-out at the airfield as back-up for the cruiser.”