Season 18—Adventure 1—CARSTAIRS Part 2—Episode 8… Scene 1… Inside Nuttal & Mann’s Saloon… Boomer and Linda sidled up to the bar—scanning the room as they sidled, “I don’t see any of Carstairs’ bunch here.”

Moments later—a couple of bad guy movie extras (the kind who make their living by dying) walked into the saloon, “A bottle of whiskey, barkeep—NOW!”

One of the two bad guy movie extras decided to hassle our heroes, “What are you doing in here little lady?” 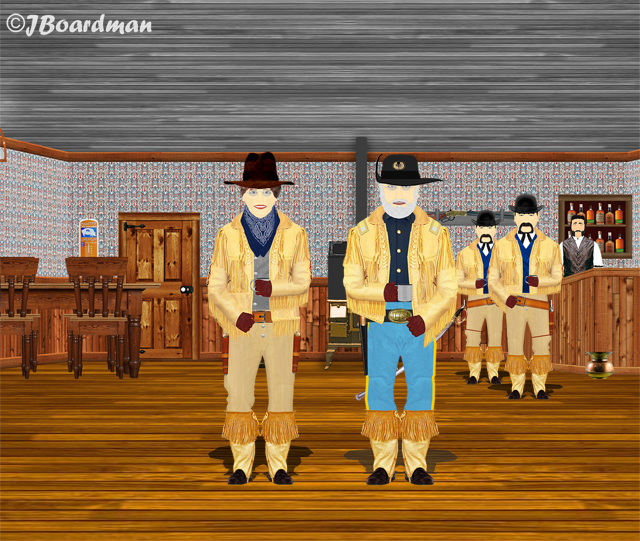 “I asked you a question—answer me!”

“Do you hear anything, cuzzin?”

Both the bad guy movie extras reached for their guns.

The other scurried-out of the saloon suffering a flesh-wound—surviving by a half-inch.

“Did you miss on purpose?” Linda asked.

“Yup,” He replied, “Somebody had to report back to Carstairs.”

“Thank you,” Hiram Smith, the barkeep said, “They’ve been driving our usual customers away.”

“We’ll contact Marshal Hickok and ask him to remove that fella on the floor,” Linda said, “We’ll follow the survivor.”

Carstairs will not be pleased—do we care, Gentle Reader™?

4 Responses to “What are you doing in here little lady?”