PREVIOUSLY: “Do you think the bad guys followed us to the 21st Century?” Linda asked.

“Of course, they did,” Chris Earp replied, “Because Juco.”

“That much is certain,” Chris agreed.

Episode 2… Scene 3… On the road outside the Posse HQ™… Carstairs and Company just happened to stop for a break precisely in front to the entrance to the Posse HQ™.

Just as fortunate—Cujo was distracting Juco at that very moment.

“To try and recruit more help—Moosehead City is the largest town in the county, and they must have some miscreants looking for work.”

Season 18—Adventure 3—21st Century Posse™—Episode 3… Scene 1… Downtown Moosehead City… Carstairs drove slowly through town until he spotted “The Dive Bar” and he and the others parked and walked to the bar.

(It’s a good thing, Gentle Reader™ that our heroes had left before they arrived—right?) 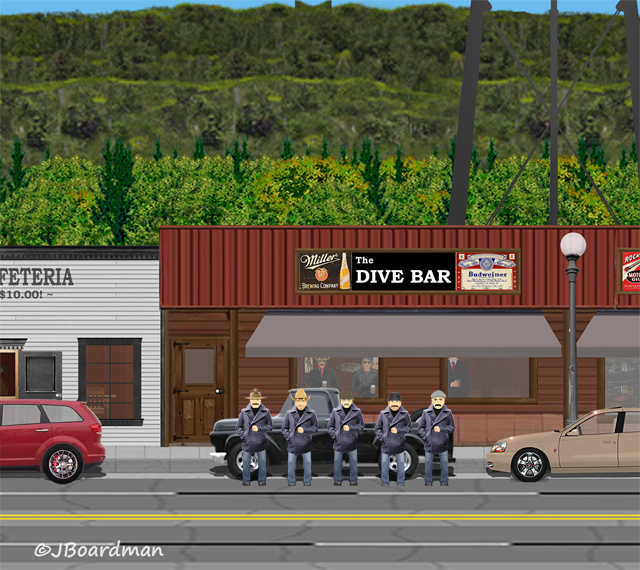 Inside the bar they found the usual bar patrons one sees in almost any bar at 10AM—many of them were, by choice, unemployed—and not certain they wanted employment.

Others were from out of town—drifters, mostly—and were just the people Carstairs was looking to find.

After completing his business (and enjoying a cheap beer), Carstairs left with his new hires.

The next item on his agenda was to find a hideout. 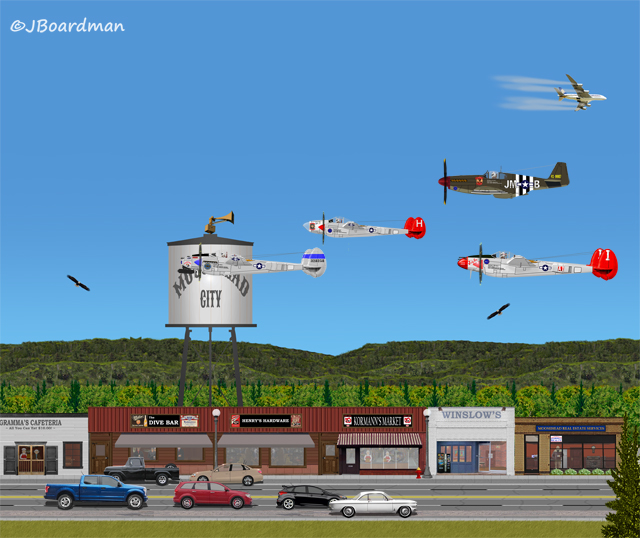 Our Heroes flew over Moosehead City

They were having entirely too much fun to worry about Carstairs.

And too—Cujo helped to prevent them from worrying—she felt they needed some time for fun without worrying.

She’s good like that. She KNOWS that Carstairs has become the biggest threat to the Posse™ yet—bigger than Big A, Hopkins, and all the other evil-doers they’ve ever dealt with. Combined!

4 Responses to Carstairs & friends paused to pose outside the Dive Bar.