“The drinks are strong, and the food is edible.”

PREVIOUSLY: “We’ll start with the dive bars and saloons in Moosehead County, and then, if necessary, head down to the Twin Cities.”

The more he paced—the better he liked the idea.

He hated the fact the Carstairs usurped his position as “head bad-guy” on the Port of Danger Bay, Minnesota blog.

He went so far as to read on the blog the following: “Episode 3… Scene 2… Over Moosehead City…She’s good like that. She KNOWS that Carstairs has become the biggest threat to the Posse™ yet—bigger than Big A, Hopkins, and all the other evil-doers they’ve ever dealt with…”

Season 18—Adventure 4—The Hunt—Episode 5…  Boomer and Allen Simpson arrived outside Red’s Place… Cujo decided to have Boomer take Simpson out to visit the dive-bars as she thought that Juco may have escaped her banishment—in that she was correct.

Juco was busy helping Carstairs and gave no thought to the Posse’s™ activities.

“Howdy, fellas,” Simpson greeted, “We’re new around here—how do you like this place?”

“We like it just fine,” Fred Walsh replied, “The drinks are strong, and the food is edible.” 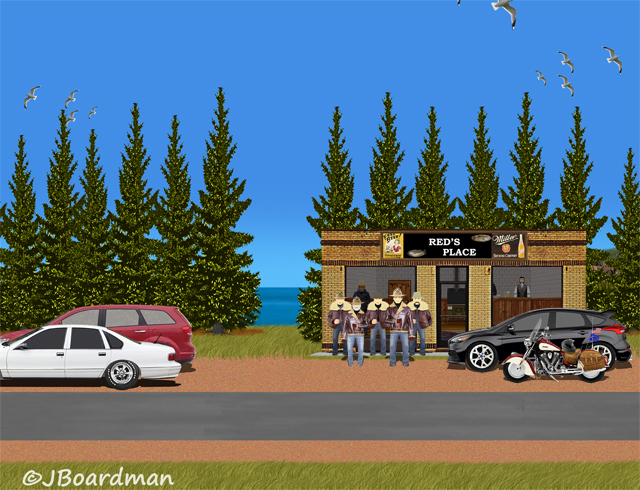 “The drinks are strong, and the food is edible.”

“I ain’t seen you fellas around these parts,” Walsh said, “Where are you from?”

“We’re visiting from the ‘Cities,” Boomer replied—thankful he wasn’t recognized as he walked into the bar.

“Any of you guys looking for work?” Big A asked, “The kind of work that could be described as dangerous.”

“No,” Simpson replied, “That’s why I waited for him to leave—he’s kind-of a goodie two-shoes.”

“He isn’t all that bright.”

“Good,” Simpson replied, “Follow me to my place and I’ll get you all set-up.”

“I expect we can’t come back here for drinks,” Walsh replied.

“Correct—I have a fully-stocked bar at my place.”

2 Responses to “The drinks are strong, and the food is edible.”