PREVIOUSLY: Walsh had to think a bit before replying—he really didn’t know anybody nearby they could count on, “There’s nobody around here that I can think of—perhaps a trip down to the Twin Cities would be in order.”

“What about your local friends?”

“They’re not trustworthy,” he replied, “They have a too-close relationship with alcohol.”

“That is NOT a good reference,” Big A agreed.

“Do it,” Simpson replied.

Just then—the doorbell sounded—Big A looked at his monitor, “Oh CRAP—Boomer & Chris are at the door—go into the garage and stay out of sight!”

“Well—look who’s here,” he said into the intercom, “Are you here to hassle me?” 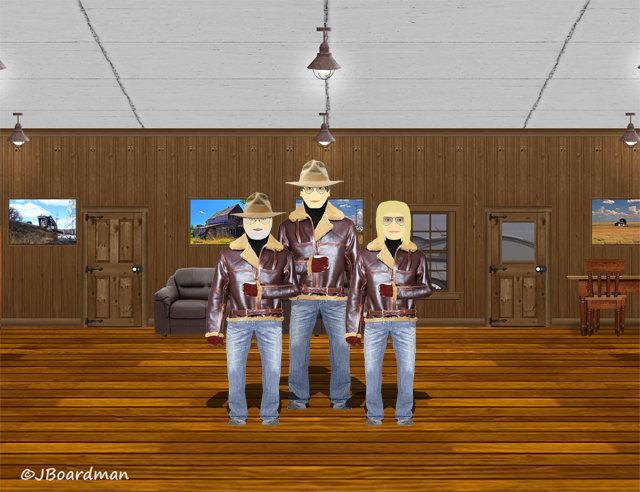 “No—we’re not kidding,” Chris Earp replied, “We’re no longer part of the Posse™.”

“We left because we required more money—and too, Wyatt Earp separated from Chris for another woman.”

Simpson was flabbergasted—and yet suspicious—he didn’t get this far to have his plans put at risk, “Let me make a few calls before I make a decision.”

Simpson went into his office to make several phone calls.

“I think—if Cujo did her job—he’ll be impressed with our résumé.”

Simpson made a dozen or more calls to his “sources,” some of whom were under Cujo’s control—and received mostly confirmation of their turning to the dark-side.

Even the Silverthorn family confirmed Boomer & Chris had turned outlaw.

“They have become criminals,” Marshal Hiram Silverthorn, Jr. angrily confirmed, “I have issued arrest warrants on them.”

Simpson was convinced they’d gone rouge, “Okay—even Marshal Silverthorn is out to get you—you’re hired.”

“Go home and remain available for now,” he replied, “But—I’ll likely put a hit out on McIntyre for you to accomplish.”