Previously: “We couldn’t help but notice all the cars in your parking lot,” Chris Earp replied, “It’s been a long time since we’ve seen that.”

“We’re under new ownership,” She replied, “Superior Homes, and they have completely remodeled the motel.”

“Thanks,” she answered, “I’m told it used to be run-down, with a couple of permanent residents—who are still renting here.”

“I reckon we’ll be on our way,” Boomer said, “We need breakfast.”

Episode 5—Scene 3… The Posse™ inside the Silverthorn Café… “What do you think, gang?” Boomer asked, “About the motel?”

“I think it’s great,” Chris Earp replied, “But still—I have some doubts—too big a change.” 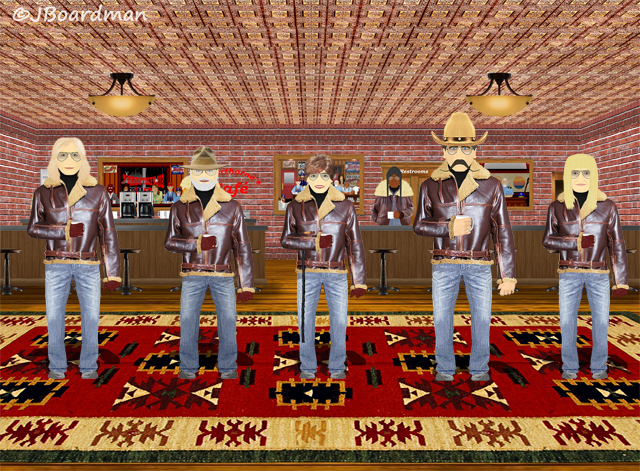 The Posse™ lingered inside the Silverthorn Café after breakfast.

“We should return to the Blue Swallow Motel,” Chris Earp said with a wicked grin, “And make our presence there known to Big A.”

“Ride through the lot?” Linda asked, “Or stop for coffee at the Rustic Café?”

“Maybe both,” Debra added, “Just to let Big A know we’re watching him.”

“I should caution you guys,” Boomer said, “We don’t want to give Big A too much cause to pause his efforts to become our worthy opponent.”

“Okay,” Chris said, “How about riding past the motel—turning around, ride past again—several times?”

“That ought to rattle his cage a bit,” Boomer agreed, “But, we should make our drive-bys at random times—not all at once.”

And Big A noticed one ride-by from his motel room window.

And when he and his new associates were having lunch in the Rustic Café—two more ride-bys. 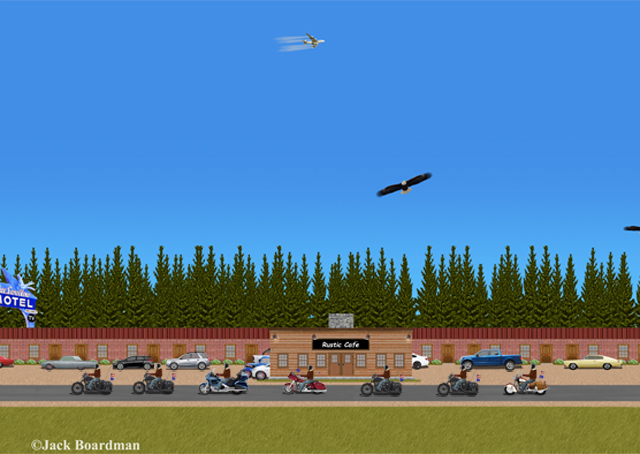 2 Responses to “What is the Posse up to?”