Previously: “Okay,” Chris said, “How about riding past the motel—turning around, ride past again—several times?”

“That ought to rattle his cage a bit,” Boomer agreed, “But, we should make our drive-bys at random times—not all at once.”

The Posse™ Rode past The Blue Swallow Motel—once, twice—and several more times with no set interval between each ride-by.

And Big A noticed one ride-by from his motel room window.

And when he and his new associates were having lunch in the Rustic Café—two more ride-bys.

Season 18—Adventure 5—SIMPSON—Episode 7—Scene 1… Simpson and Keller inside the Rustic Café… “What are they up to?” 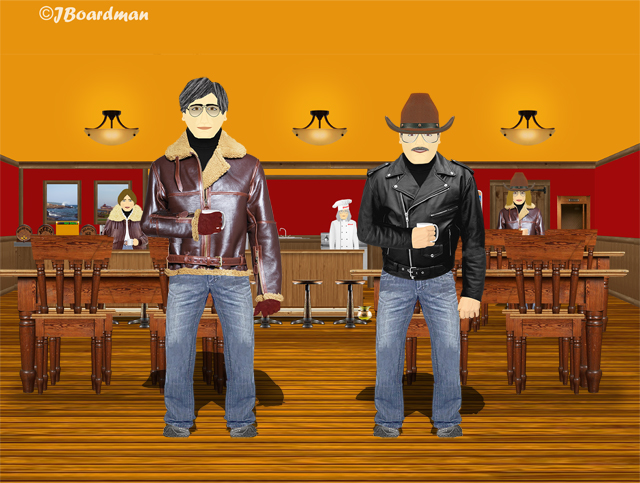 “I haven’t a clue, Al,” Joey Keller replied, “Maybe to make you nervous.”

“They’re successful at that.”

“I wonder how they knew we were staying at this motel Al?” Keller asked, “We did nothing to arouse their interest.”

Simpson paced the floor while he thought about who may have tipped-off the Posse™.

He could not imagine who may have tipped them—and then it came to him: Silverthorn! It simply had to be—having breakfast there the other day was a big mistake.

“Too late now,” he thought. He turned to Joey, “We must engineer a distraction—get a couple of our new-hires, and have them rob the bank in Moosehead City—that will cause a big-enough event to grab the Posse’s attention while we find a new place to stay outside of the county.”

“You do know the Moosehead County Sheriff is no fool—right?” Keller asked.

“Okay, Al, I have two new female recruits that have not met you yet,” Keller replied, “They’re both a little too interested in committing crimes—and don’t seem to understand the necessity of keeping a low profile around here. I’ll suggest they prove their worth to us by robbing the bank.”

“What if they’re caught and rat us out?”

“They won’t,” Keller grinned, “I’ll have one of our more promising men tip-off the sheriff.”

“And tell him they’re not the type to surrender.”

Episode 7—Scene 2… Guudelender’s Bank in Moosehead City… The two un-named women no more than got out of their car when the deputy sheriff’s car drove-up, “Step away from the car with your hands up!” one of the Sheriff’s deputies ordered. 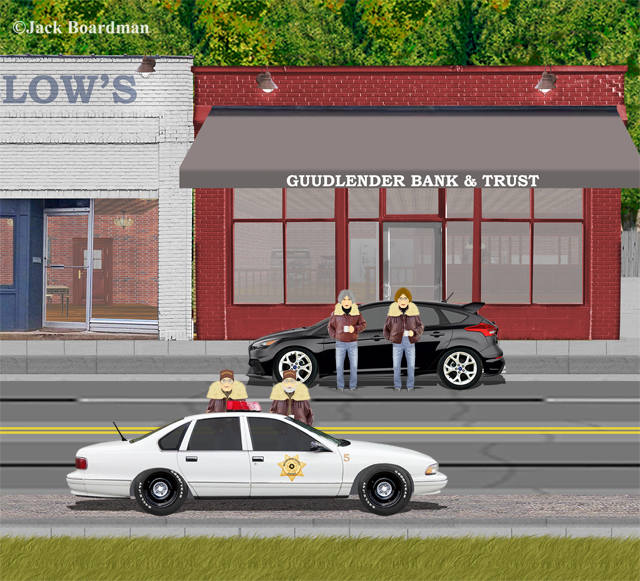 Just as Joey Keller had planned.

Simpson was pleased, as well—but wondered just how loyal Keller might be.

2 Responses to They didn’t obey the order—and reached for their guns.