Previously: The man reached under his jacket and pulled-out an old revolver.

Before he brought it to bear on our heroes—Chris Earp had her Colt .45 semi-auto drawn and pointing at his head—and Boomer had his US Marshal’s badge out, “You’ll be dead on the floor in another eye-blink—FREEZE!”

Not complete idiots, they did just that.

“Pat the women down, deputy,” Boomer said, “And you, sir, assume the position.”

“Hey, old man,” the man threatened, “I’ll tear you apart if you get close to me.”

The three were thoroughly searched and walked-over to the jail, and Boomer flashed his badge, “Officer, these three need to be locked-up.”

“Hello Marshal Boomer,” Officer Ted Sampson replied, “I know these three, and will be more than happy to lock them up.”

“I’ve already called for transportation to our jail,” Chris grinned, “They won’t be your guests for long.”

It was then that James Farkleberry, Attorney at Law, arrived at the jail.

“Hi folks,” Farkleberry greeted his friends, “Who do we have here?” 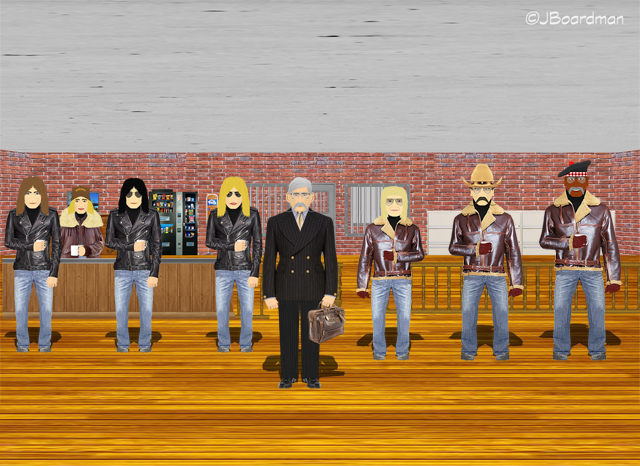 “We have,” Mac replied, “Mary Schmidt, Lola Masters, & Reed Johnson. Mr. Johnson pulled-out a gun as we were questioning this bunch.”

“You gonna represent us or not?”

“That’s my job, Mr. Johnson, isn’t it?” Farkleberry (a cousin of the Medlar Farkleberry family), replied, “And I’m damn good at what I do as a public defender.”

“That’s for sure,” Mac added, with a wicked grin, “He’s helped some of most hard-cases we’ve apprehended get a lighter sentence, or no sentence at all.”

“And you do it well—no complaints here.”

“When is Judge Hanson going to arraign these folks?”

“May I have some time with these folks?”

“Absolutely,” Mac replied, “Right now—we’ll leave while you meet with them.”

5 Responses to “Who do we have here?”