PREVIOUSLY: There was complete silence—all were too stunned by the news.

“I just can’t accept that Mac is gone,” Boomer said, tears coursing down his face, “I just can’t!”

Just then there was a knock on the door.

“Cujo informed us of Big Mac’s passing!” Sarah exclaimed as she and Jay came inside, “She brought us here.”

“It is good to see you again, Sarah & Jay,” Boomer replied, “It’s too bad that it’s under such horrible circumstances.”

“We’ll have to find a motel or hotel,” Jay said.

“Nonsense, there is room for you to stay here,” Boomer replied, “We have guest-rooms.”

“I’ll show you to your room,” Chris Earp said, “Right this way.”

Boomer and Jay said their final farewell to Mac—the rest of the Posse and friends would each, in turn, say their farewells to Big Mac. 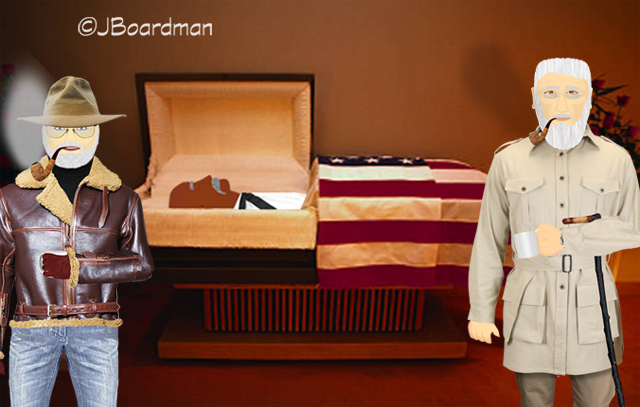 Boomer and Jay said their final farewell to Mac

The last, and longest visitor was Colista McIntyre.

Boomer & Jay were off to the side in funeral home front room where they could just talk—they were, after all Big Mac’s oldest friends, “I simply can’t handle this, Jay.”

“I’m with you, Boomer,” Jay replied, “Save for Sarah, we knew Mac the longest of anyone here.”

It wasn’t long before Sarah Cooper joined them—tears flowing down her face, “This is almost more grief than I can bear.”

Jay hugged her for several minutes.

One by one the Posse™ and friends joined them—including Collie McIntyre.

Hugs were exchanged in silence; words were not necessary. Just being together for Mac was enough for all present.

“Remember the time when Mac and Simpson had it out?” Boomer asked.

“I do,” Jay Merton replied, “Mac turned Big-A every way but loose until he was lying on the ground and whimpering.”

More stories followed—everyone there had a story to tell.

MODERN LOUNGE, Episode 7—Scene 2 … The procession arrived at the Cemetery … The cars and the hearse and family limousine parked. 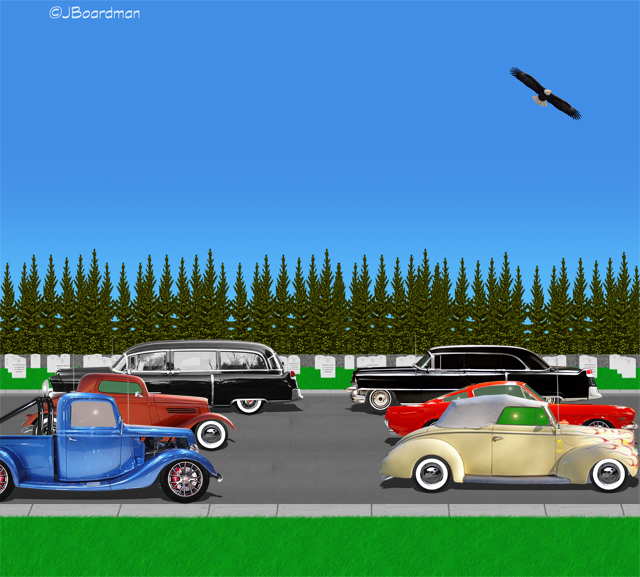 The cars and the hearse and family limousine parked.

The casket was brought to Mac’s final resting place, and the Reverend Thomas “Tag” Guudlender led the prayers for Carl James McIntyre.

MODERN LOUNGE, Episode 7—Scene 3 … A week later—Boomer and Jay Merton returned to the Cemetery … And lingered in front of Mac’s grave in silence—with tears streaming down their faces. 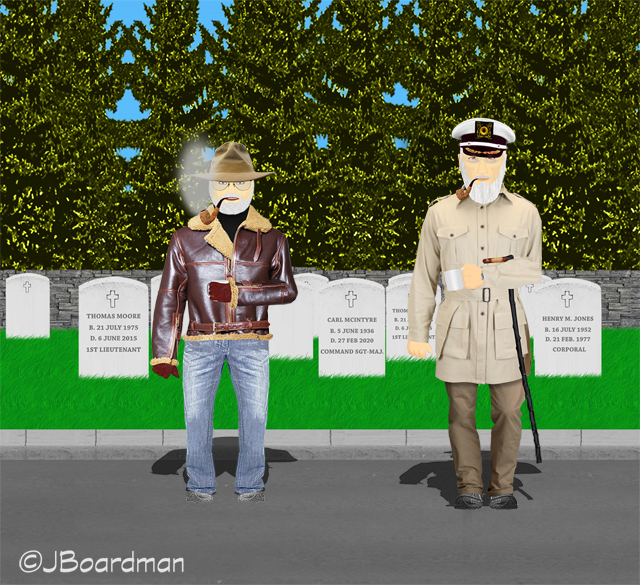 And lingered in front of Mac’s grave in silence

The two old friends finally left for home—or a bar. Who knows?

Thus–this Adventure has ended. Our story will be Continued …

5 Responses to THE FINAL FAREWELL