PREVIOUSLY: Wiggins was the only member of his bunch who had combat experience—the others were relatively good pilots, and able to be trained.

He also knew he had to expand his operation—but how?

Wiggins had an idea—but it was a long-shot.

He called Clyde Barrow, the commander of the “Me 262 Squadron,” based at Holman Field in St. Paul, “Clyde—how would you like assert your Second Amendment rights?”

“Hey, Denny,” Barrow replied, “Good to hear from you. Of course, I would—and do every day.”

“With your Messerschmitt 262 planes?”

“I have fifty-caliber MGs to spare,” Wiggins replied, “So arming them is no problem. I’ll send you decals to place on the top of your plane’s tails. “Welcome to the Recreational Airforce.”

“We’ll leave as soon as we apply the decals. It will be great to put these old warriors back in service.” 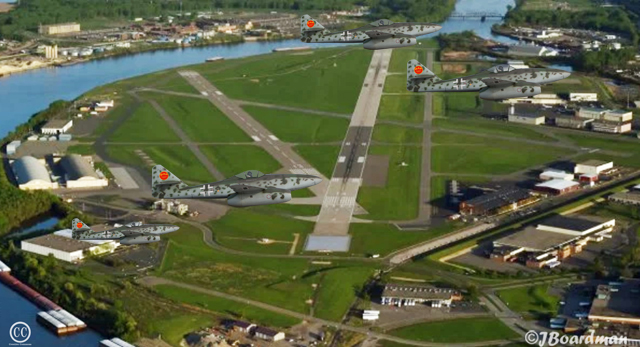 “I agree, Clyde,” Joey Snyder replied, “Folks around here don’t seem to like it if you have more than one of an aircraft type—especially ‘enemy’ airplanes.”

“I LIKE the fact we have real guns for these birds,” Jack Armstrong added, “And the fact we’ll have the chance to shoot-down real opponents.”

“I’ve arranged for our spare parts and ground crew to be delivered to the new airfield. They should arrive in a couple of days,” Clyde added, “We’ll also need to keep a low profile for a few weeks after we arrive.”

“What if our new boss…” Jack began. 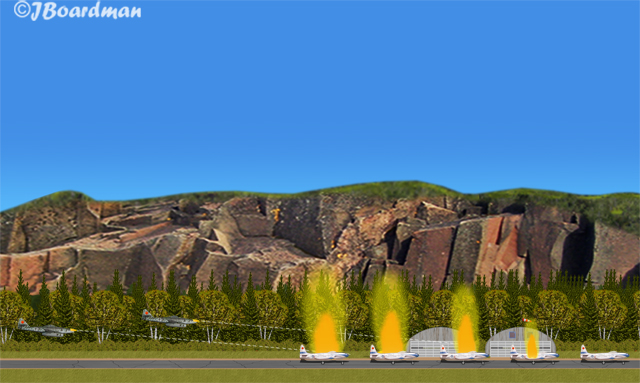 The Me 262 Squadron arrived near Danger Bay.

They destroyed the entire Recreational Air Force—both airplanes AND personnel!

“No, Clyde, word has it they have sidewinder missiles now.”

“Get similar missiles. That will take some doing—it would be best for us to return home and prepare.”

Alphonso, AJ, & Boomer emerged from the Woods… All three drew their weapons.

“Easy, fellas,” the man leading the column said, “I’m James Wilford and my boys and I’ve heard you folks are having a bit of problem with Milton Bell and his bunch.”

“And you just appeared out of nowhere to help us?” Boomer asked.

“No,” Wilford replied, “A ridiculous talking pigeon told me of your situation—and asked me to help you.”

“Flutters! I should have guessed,” Boomer replied, “Very-well, sir, we have to stop Milton Bell.”

Episode 1—Scene 4… On the North Road… Chris & Bill with Mac rode with cautious haste towards where Flutters reported the last known place he saw Boomer & company. 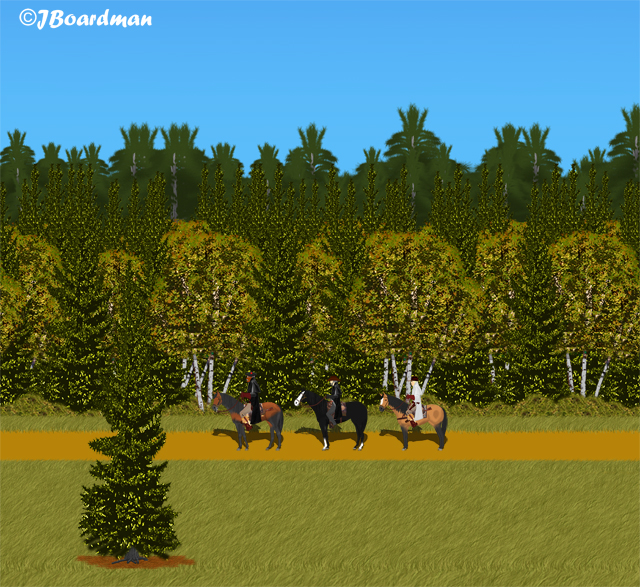 “What means this term, ‘cautious haste,’ I wonder,” Chris asked.

“I suspect—although I’m not entirely sure—word-play on the part of the author of this particular story.”

8 Responses to Meanwhile—in the 19th Century…